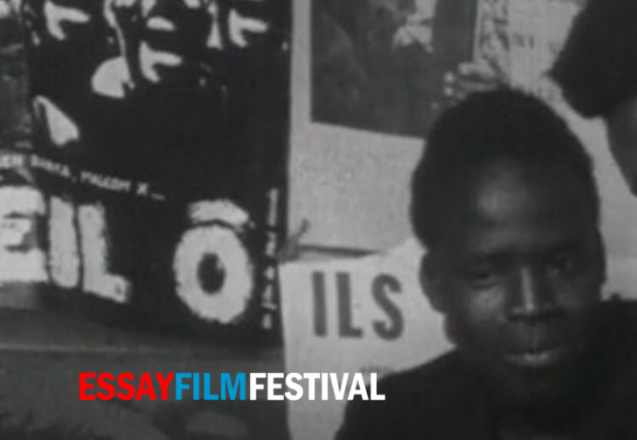 The Essay Film Festival returns 25 March to 3 April for its 2021 edition, which this year will be held entirely online.

How will the festival work online?

All the films will be free and open to anyone in the UK. To watch the films, visit our online screening room, where you will be able to view all the films at a time that suits you. The screening room does not require any sign-ups or downloads. While most of this material will be made available for the entire festival window (25 March to 3 April), one or two items will be up for a more limited period, so you should check the window of availability for each film.

What about live events?

Our programme of live events – open to audiences globally – includes artists’ and curators’ talks, conversations with filmmakers and discussions with critics and researchers. These will take place online, via a platform called Collaborate, which is very simple to use. Book your place on the website (http://www.essayfilmfestival.com), and a link will be sent on the day: again, you do not need to create an account or download any software.

What is in the programme this year?

For  theorganisers, the essay film is a critical intervention in the world, combining a passion for investigating reality and for asking tough questions about society with an open, inventive and even playful approach to film language and forms of representation.

This year’s programme reflects that dynamic ambition for the essay film, with a wide range of contemporary and archival works from different parts of the world, accompanied by live talks and conversations featuring artists and researchers.

Madeleine Hunt-Ehrlich will give a talk about her forthcoming project on Suzanne Césaire, alongside a selection of her short films exploring alternative voices and narratives from African-American history.

Cauleen Smith will be joining us to discuss a programme of her experimental works reflecting her longstanding interest in Afro-futurism and jazz, especially Alice Coltrane and Sun Ra.

Two programmes of short films by Kevin Jerome Everson focus on themes of labour and place, which the artist will further develop in an illustrated talk and conversation.

From the Asian Film Archive we share Monographs, a series of video essays responding to the uncertainties of the pandemic from ten contemporary Asian artists, some of whom will be speaking at the festival with critic and essayist Kevin B. Lee.

John Gianvito will be in conversation about his latest film, Her Socialist Smile, an historical essay about Helen Keller that foregrounds her radical politics and commitment to social justice.

Nuria Giménez’s My Mexican Bretzel uses found footage and literary invention to play with the conventions of film portraiture and highlight the invisibility of women’s histories – themes that the artist will discuss in a live conversation.

An extended programme around the work of Jenny Brady features three of her own films and three films curated by the artist, alongside a talk about her current research into musical performance and the sonic practice of Alvin Lucier.

The archival section showcases films by Med Hondo and Sidney Sokhona, both representing critically the lives of African workers in France in the 1970s; writer Assia Djebar’s filmic reinterpretation of colonial travelogues and newsreels shot in Algeria; and the collaborative films of Yugantar, India’s first feminist film collective.

This year’s programme closes with a study day devoted to Brazilian filmmaker Eduardo Coutinho, specifically his films Man Marked for Death, Last Conversations and the unfinished A Day in Life.