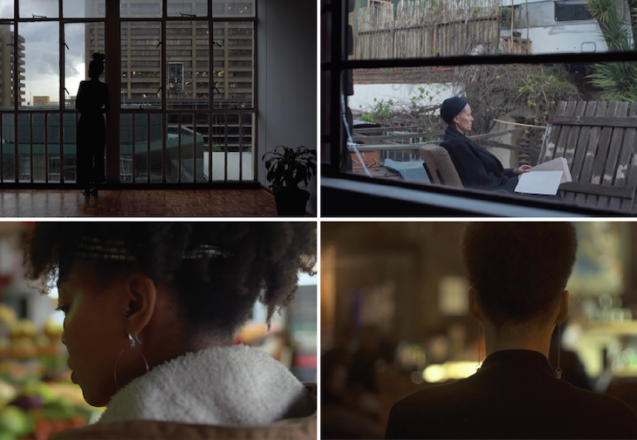 YOU CAN REGISTER ONLINE HERE

Screen Worlds and BIMI are delighted to welcome you to the UK premiere of Nobunye Levin’s film SpilLover (2021). The film will be made available on BIMI’s online screening room on 1 November for viewing in your own time, after which we would love you to join us for an online performance talk by, and Q&A with, the director, as well as some of her collaborators – filmmaker Palesa Shongwe and artist and writer, Bettina Malcomess – on 3 November at 5pm London time. The event will be chaired by Lindiwe Dovey and co-hosted by SOAS CCIMSS, and the Zoom and screening room links will be circulated to registrants closer to the time. The film is available for UK viewers and the performance talk is open for everyone anywhere in the world.

A cinematic poem of relational film fragments assembled in dialogue with various films, songs and written texts about love. Love burns an appetite only to reignite it again. Love distracts, leaving one longing. How to love again. Women walk and wander and imagine how their love can liberate. Love spills over in stories shared, observations expressed and memories recalled. A feminist exploration of moments of women’s lives strung together by their appetite for love.

The film fragment as mode is about ongoing processes of exploratory potentialities through which the artwork and knowledge reveals an open-endedness. This is enabled by a conception of the film fragment as “enunciation” which offers “a world that is constantly invented” (Mignolo as cited in Gaztambide-Fernández, 2014, p. 198); a fragment is mobile, responsive, malleable and mutable.

Nobunye Levin is a filmmaker, scholar and lecturer. Nobunye’s filmmaking practice and research is often concerned with the politics of aesthetics and is informed by the epistemic, poetic and political possibilities of cinematic experimentation. She is preoccupied with feeling and thinking in, and through, film practice to produce affective cinematic experiences. Nobunye is a postdoctoral research fellow in decolonising screen worlds in the Screen Worlds: Decolonising Film and Screen Studies project.

Bettina Malcomess is a writer and an artist based in Johannesburg. She is currently completing her PhD in Film Studies at Kings College London, a history of film and the South African War. She is the co-author of ‘Not No Place: Johannesburg, Fragments of Spaces and Times’ (Jacana, 2013). Malcomess runs a platform for collaborative experimentation across forms called the joining room, about to release the vinyl and publication: Proximal Distal: Sonic Passages. Working under the name Anne Historical, her artistic practice inhabits multivocality and density, embodied research and material investigation. She is currently producing work with analogue film and sound media that inhabits the entanglement of memory, technology and history: set of unfinished articulations in counterpoint voices, signals and gestures: an attempt to queer the signal.

Palesa Nomanzi Shongwe is a South African born filmmaker, film scholar, and Fulbright recipient currently working as a writer, and Script Editor in both television and film. Palesa’s independent film practice includes both documentary and fiction. In documentary, she is interested in the essay film, personal ethnography and the ‘archive’. As a writer and director of fiction, she is interested in narratives that focus on the lives of women in the context of a feminist and decolonial storytelling. She has written and directed three short films, Atrophy (and the fear of fading) 2010, which won the Ecumenical Jury Prize at the Oberhausen Short Film Festival in 2011 and has been featured at numerous festivals, including most recently, Vision Du Reel and VideoEx; uNomalanga and the Witch (2015), which won Best Short Film at the Durban International Film Festival (2015) and The Baobab Short Film Prize at Film Africa, UK (2016); and most recently, as part of the 5x5x5 Documentary Residency Program, she completed an experimental documentary 11 to 19. She in an alumni of the Realness Institute (2020) and currently developing her first feature film script, Mubi. Palesa began her career in film in 2004 as a script editor. Since then, she has worked as a researcher, development producer, story-liner and script writer for various projects. Between 2015 and 2019, she joined the Film and Television Department at the University of the Witwatersrand’s School of Arts, as a lecturer in film history, theory and screenwriting. In 2019, she returned to independent filmmaking as a full time writer and director.